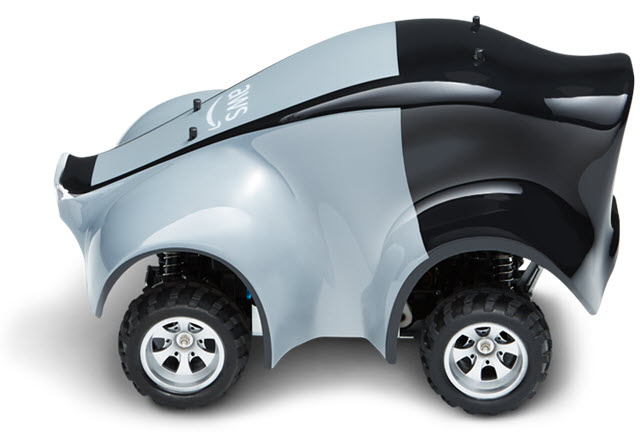 This weekend, we’re hosting an AWS DeepRacer Workshop (for free!) at our Melbourne HQ. But before then, we figured we’d clue you in on just what DeepRacer is in the first place, and why we think it’s so cool.

DeepRacer was created by Amazon Web Services, a division of Amazon that offers cloud computing and application programming interfaces (APIs) for individual developers, companies, and everyone in between. It’s a 1/18th scale autonomous race car, with a built in HD camera, an Intel Atom processor, and WiFi connection. Basically, it’s a mini monster truck with a high-tech twist.

The DeepRacer car uses technology called reinforcement learning – an area of Machine Learning. Reinforcement learning involves creating some sort of goal or objective for an algorithm, or “agent”, and either rewarding or penalizing the agent on a trial and error basis.

Think of it like training a puppy – when the puppy doesn’t follow a command, you don’t give it a treat. But when it does follows a command, you give the treat as a reward. Over time, the puppy learns to sit or shake on command, because it understands that by doing so, it will maximize the chances of receiving a treat. Just like a puppy, reinforcement learning encourages agents to maximize their chances of receiving a reward, and in return, allowing them to actively learn, adapt and improve in an interactive environment.

Cool, but how is DeepRacer involved?

With reinforcement learning, users can train DeepRacer cars to drive on predefined race tracks, completely independently. Using the camera, the car drives around the track, predicting when to steer, speed up, and slow down to make turns and other maneuvers based on the reinforcement model controlled by the user.

If the car stays on track, the model is rewarded. But if it veers off the track or makes other blunders during its run, the user withholds the reward. Over time and through many iterations, users can continuously improve the path the car takes, shaving seconds off the car’s finish times.

In fact, getting the car to complete tracks as fast as possible is the goal of the AWS DeepRacer League, the world’s first global autonomous racing league. People around the globe compete to get their cars to be the first to complete tracks, both in online circuits and public events.

If you’re interested in learning more about AWS DeepRacer, be sure to join us on Saturday, November 8th at the Melbourne HQ for a free workshop with Robert Green, a systems engineer at Alstom, a solutions architect for Amazon Web Services, and President of Central Florida Cloud. Middle school, high school, and college students, parents, or anyone interested in tech will get a grasp on Machine Learning through this fun and hands-on STEM workshop. Click here to learn more, and click here to RSVP and let us know you’ll be there!