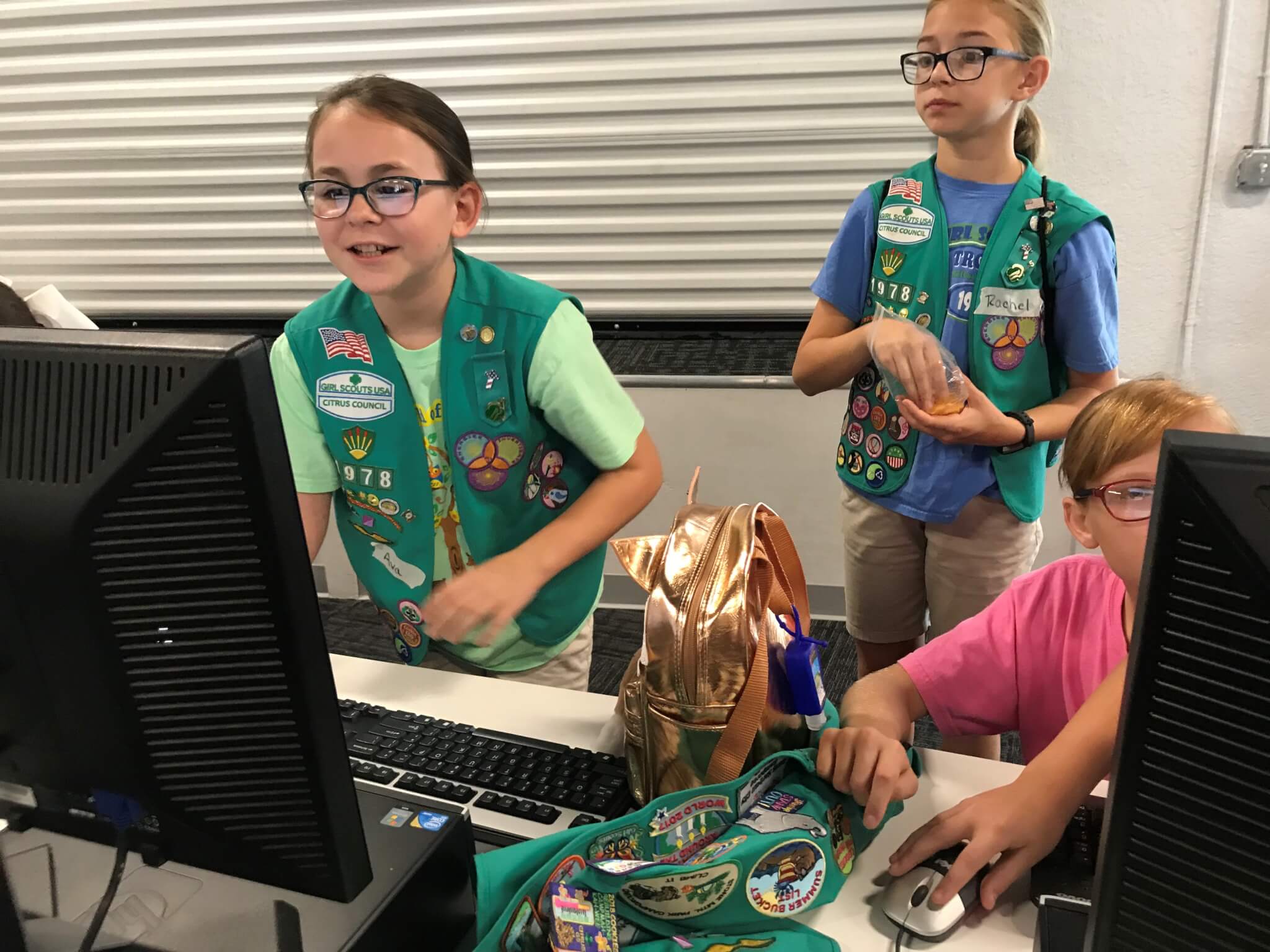 Cybersecurity and the Girl Scouts of America

On Saturday October 7th, Codecraft Works partnered with Raytheon and Vector 35 to give the Girl Scouts of America a lesson in cybersecurity. The girls earned three badges for their vests, learned about internet safety, and gained a deeper understanding of privacy, networks and binary code. While Girl Scouts are known for their crafts and cookies, these new badges are allowing these young girls to do much more than ever before.
“These badges didn’t exist yet, because it wasn’t as easy to get access to computers and the internet,” said Virginia Rodda, a volunteer at Saturday’s event and former Girl Scout. “But, they were just starting to do ‘learning about computer’ badges. I’m excited that things are changing and that they can do badges like this because it’s important to learn tech-based skills.” Mrs. Rodda is right, and though Saturday’s event was for the girls, lessons in cybersecurity can benefit anyone and everyone.

In 2015, Raytheon and the National Cyber Security Alliance (NCSA) partnered to conduct a survey targeted toward millennials between eighteen and twenty-six years of age across twelve different countries. This survey found new insight into the general preparedness and interest in cybersecurity among young adults, as cybersecurity threats increase, and the field along with it.
What was most startling about the survey was the fact that 58% of millennials across the globe noted that they had either not received formal lessons in internet safety or were unsure if their lessons provided knowledge on that subject. However, though a majority of those surveyed said they lacked the formal education, 65% shared that they felt safe online. Of those who had received a talk about internet safety, none specifically listed teachers and/or classrooms.
What does this mean? And why is this important? This data shows that, not only are young adults not learning about internet safety at all, but the majority of those that are, aren’t learning about internet safety in schools. In other words, educational standards have not been changed to meet our digital world. But, not only are kids not being taught general internet safety rules and tips, they are also not being equipped with the skillset and knowledge needed to find their place in a rapidly growing industry: cybersecurity.
This survey also found that only 31% of young adults attended schools with systems in place that prepared them for a career in cybersecurity or related fields. This means that awareness is low, and while students may be using computers in their classrooms, these computers aren’t being used to their highest potentials. Raytheon found that 38 % of millennials globally (41% in the U.S.) wanted more training for cyber related careers. Thankfully for those of us in Melbourne, Codecraft Works is stepping in to meet this need.

Codecraft Works is an “educational technology company powering a blended learning approach to computer science, engineering, and cybersecurity education for students.” They give community members a hands-on experience with programming and provide mentorships and internships for those seeking careers in cybersecurity or its related fields.
“I didn’t have access to educational opportunities or mentors like this when I was younger,” said Codecraft founder, Shannon Landin. “It wasn’t until I was finished with college that I recognized my skillset and met the mentors who could teach me what I needed to know. I ended up having to learn on the job and later in life rather than being given the option early when I was still navigating my career and education.
“I feel like I wouldn’t be where I am in life without having learned to code,” continued Landin. “I was able to do more as an entrepreneur because of those skills. Learning to code empowered me to be the person I am today, and I want to share that with any kid that I can.”

So, there’s a gap between those wanting to pursue cybersecurity and those who are actually entering the field. But, what if I told you that there was a gap within this gap? Remember that low awareness? Well, when asked if they knew what a career in cybersecurity involved, 51% of U.S. men had this knowledge, whereas only one-third of U.S. women did. The survey showed that 9% more women reported not having cybersecurity careers talked about as an option for their future. So, not only are cybersecurity related careers not being filled, there are also fewer women standing up to fill these seats. Our institutions, when they do talk about cybersecurity, aren’t talking to women. That’s why Codecraft’s event with the Girl Scouts was so important.
“When I took computer science, I was usually the only girl in my class, or one of two or three girls,” said Beth Murphy, Troop Leader. “I think more girls should get the opportunity to learn about [cybersecurity] and pursue it.”
Thirty girls gathered in Codecraft Works and learned that if interested, they can pursue careers in cybersecurity. Though the girls in attendance were all between the ages of ten and eleven, they learned valuable internet safety skills that will be useful as they continue to interact on digital forums. While they played games and watched videos, they were being given the building blocks they need to enter a rapidly growing industry.
Now, more than ever, we need to teach our younger generations about internet safety and online security. With these skills, young people can grow to change the entire digital landscape and make it safer for those to come.